In 26 CE out of the blue there seemed to come a man of flesh and blood who wanted to be baptised by his cousin, before starting his public life. When he was baptised there happened something very special. Out of the skies there came a voice, which people could hear and could make them wonder who that man was. It was the Ruach Hakodesh Who descended in demut gashmit as a yonah upon this man who was going to be the most important Rebbe.

“Now when all the people were immersed, Yeshua also was immersed. And while He was praying, heaven was opened and the Ruach ha-Kodesh came down upon Him in bodily form like a dove. And from out of heaven came a voice, “You are My Son, whom I love—with You I am well pleased!””
(Luke 3:21–22 TLV)

This was the first time that publicly it was told this man being the ben haElyon or son of the Most High. Later in history the world would have to face a Greek/Latin corruption of the Messiah’s original Hebrew name. From this man original and popular name Jeshua (or Joshua short for Jehoshua or Yahushua / Yahoshua meaning “YaHuwha or Jehovah is salvation”) was made Issou or “hail Zeus” to come in line with the Roman gods, the Roman Catholic Church promoting that name “Jesus” as a three-headed godhead.

When the Messiah of Israel was born, the name ‘Yeshua’, or in modern spelling “Jeshua”, was a popular name given to Jewish baby boys.

From archaeological work we know that in the time of the Second Temple the name Yeshua (or Jeshua) was then a popular form of the name Yehoshua and was one of the common names.  { Roi Mendel, “Ha-‘chasifa’ shel qever Yeshu: qiddum mkhirot,” Yedioth Ahronoth, 25 February 2007, at http://www.ynet.co.il/articles/0,7340,L-3368783,00.html.} Therefore many ossuaries can be found bearing the inscription ‘Yehuda bar Yeshua’. In an article in the Guardian is mentioned that Professor Kloner told the Yedioth Ahronoth newspaper that the name had been found 71 times in burial caves from that time period {Ed Pilkington; Rory McCarthy, Is this really the last resting place of Jesus, Mary Magdalene—and their
son? The Guardian (27 February 2007) at http://www.guardian.co.uk/religion/Story/0,,2022252,00.html.}

“We know that Joseph, Jesus and Mariamene were all among the most common names of the period. To start with all these names being together in a single tomb and leap from there to say this is the tomb of Jesus is a little far-fetched, to put it politely,”

said David Mevorah, a curator of the Israel museum in Jerusalem.

Today there are bloggers and certain Christian writers who claim we may not write Jehovah or Jeshua because the Y did not exist at that time. But this makes no sense, because language evolves and we use in our language today a contemporary spelling and not one of a particular period, be it the second temple period or the 17th century of the first King James version.

It also does not make any sense to think the name Yahshua (like certain do) becomes an issue of salvation. We can find groups who say that anyone not saying ‘Yahshua’ isn’t saved. This is an extreme heresy.

“Those who follow Sacred Name teachings (such as the Assemblies of Yahweh) believe that it is essential to salvation to use the correct pronunciation of the name of the one most Christians call ‘Jesus.’”

The Assemblies of Yahweh write:

“We affirm that it is necessary and most important to our salvation that we accept the revealed, personal Name of our Heavenly Father YAHWEH and the Name of His Son, our Savior YAHSHUA the MESSIAH.”

“Along with other Sacred Name Groups, the House of Yahweh recognizes Yahweh as the name of the Creator and Heavenly Father. They recognize Yahshua as the name of Yahweh’s Son and Messiah. Unlike other sacred name groups however, the House of Yahweh uses
the names of Yahweh and Yahshua exclusively. The House of Yahweh teaches that all other titles, such as God (El, Elohim, Theos, Deus, etc.), Lord (Ba’al, Adonai, Kyrios, Dominus, etc.), Jesus and Christ are names or titles of pagan beings that were forced onto the true ‘Mighty One.’ Hawkins’ (the founder of the cult) ‘refuses to even call Yahweh a god, teaching that Scripture refers to Satan, not Yahweh, as ‘the god of this world.’ The use of the names ‘Yahweh’ and ‘Yahshua’ are believed to be essential to salvation.”

Naturally it is known by lovers of the Most High Elohim that some centuries ago certain religious groups made a great effort to wipe away the Sacred Name of God or to create confusion between the two Biblical figures Jeshua and Jehovah, by calling them both Lord, so that people would not know if there was spoken about the Lord above the Lord of lords and above all lords (Jehovah) = the Lord God, about the Lord of lords or the Lord Jesus (Jeshua the Christ) or a Lord and owner. That oblivion of God’s Divine Name made it much easier to have people come to believe in a so called Tri-une or trinary godhead (the ‘Holy Trinity‘).

Certain ‘Sacred Name groups’ speak of the Rabbis or others changing Messiah’s name in the Tanach to hide it from us. We are convinced there is nothing that supports their position that ‘the Rabbis’ changed the way the name of Yeshua was pronounced in the books of Chronicles, Ezra and Nehemiah.
In a certain way the pronunciation is subject to dialectic and regional speech sounds. The Elohim would never exclude a person because he or she used or uses an other sound. What matters is what they believe and what is important is how they keep people apart and do not get confused about them.

It is important that people believe God when He says Jeshua is His only begotten son and that they not make of it that God would have said that Jesus is Him, having come down, and as such Jesus being a god son. Such interpretation would be “killing” or taking away the opportunity to enter the Kingdom of God.

Therefore, if a person would pronounce Jeshua or Jashua in an other way or even would call Jeshua Jesus, with the intention of looking at him as really him being the sent one from God and His begotten beloved son, then there would be no harm done and that person still can put his or her hope in the return of Christ and the coming Kingdom of God.

We out of practicality, also using different languages and different Bible translations, prefer to use the contemporary spelling, or the spelling rules imposed by the national spelling council, with the exception for the Dutch Name of God, where according to the spellings-commission it is “Jehova”, we keep using the form which is also used in many more other languages, ending with an “h” (Jehovah) like it is also pronounced in Dutch. 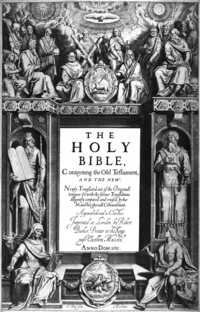 With a Y, I or J what matters is that we come to belief in the One Divine Creator God and His solution for mankind its rebellion. If you want to use the King James bible of 1611 with its old spelling, and still want to speek of thees and thous, by all means do so, but read it properly and have your ‘I’ , ‘v’ and ‘u’ where we would place a ‘J’ , a ‘u’ and a ‘v’. So you may read Iesus instead of Jesus or Jeshua, and be happy with such texts which say

Luke 3:21-23 KJV-1611 Now when all the people were baptized, and it came to passe that Iesus also being baptized, and praying, the heauen was opened: (22) And the holy Ghost descended in a bodily shape like a Doue vpon him, and a voice came from heauen, which said, Thou art my beloued sonne, in thee I am well pleased. (23) And Iesus himselfe began to be about thirty yeeres of age, being (as was supposed) the sonne of Ioseph, which was the sonne of Heli,

And when you say the King James Bible is the only right bible than you should use Iehovah for God’s Name.

Exodus 6:3 KJV-1611 And I appeared vnto Abraham, vnto Isaac, and vnto Iacob, by the Name of God Almighty, but by my name IEHOVAH was I not knowen to them.

Though we do not belief such limiting idea that God would only have Old English speaking people to hear and to understand His Word. We even believe that there are today many more accurate Bible translations than that 1611 English Authorised Bible Version.

When we do speak about God, remember than that we speak about the elohim Hashem Jehovah and not about Jesus. When we talk about Jeshua, remember than that we speak about the son of man and son of God who is known by many as Jesus Christ. That name Jesus is already so many centuries used for that sent one from God, that it would not be of use to go and fight against that “use of name” and therefore we also are not against bibles with the name “Jesus” in it and read also publications where that false name, but today ‘common name’, is used.

Existence and difficult recognition of the Supreme Deity Being

From nothingness and choices being made

In life, the point is that man should be well aware that he was made by a Supreme Being at some point in time.

A video giving an introduction to the Jewish holiday of Purim, talking about all of the great traditions of one of the most fun holidays in the Jewish calendar.

Spring bringing new life to the earth and mankind

In these dark times of Covid-19 we have a remembrance day of coming light and a new world.

By a man of faith hope coming unto us

The man who loved the Law of the Elohim (Ps 119:97) and was known by God to be a righteous man, blessed and praised his Bo’re and was willing to do everything that Hashem wished him to do. Those wanting to fall under the promises made to Abraham should be people following in the footsteps of Abraham, having the Faith in the same God as Him.

From the Primeval history of judgment to a story of hope

We are given God’s Word in the Torah, to have a light of guidance and to have some good instructions to build up our lives and to help others to grow and join us on the path to the Elohim Hashem Jehovah.

Purim Vorhang or Purim of the Curtains

After a respected Jew was falsely accused of stealing the royal curtains from the governor’s palace, the entire Jewish community of Prague was in mortal danger. But after miraculous intervention, the real culprit confessed to the crime, sparing the Jews of the city.

Is it possible to fulfil one’s obligation for Hanukah with electric light bulbs since it does not contain oil or a wick and is not reminiscent of the Menorah lighting in the Bet Hamikdash whatsoever.

Days of Chanukah- Days of Faith

Originally posted on Yeshua Centered Judaism:
The Days of Chanukah- Days of Faith As opposed to the other holidays and festivals which were already existent since Hashem gave the Torah to the Jewish nation, the holidays of Purim and Chanukah were brought about through two wicked men, Haman and Antiochus. Maran Rabbeinu Ovadia Yosef zt”l…

Our Responsibility in corona-times #2 Opportunities for spirituality and reflection

In 2020 our wintertime “festival of lights,” shall have to be celebrated with a nightly menorah lighting, special prayers and fried foods in a very close circle at are own home, without invited people.